Humans are said to be the most intelligent species on this planet, and yet, there’s so much about our own bodies we haven’t understood or discovered. Combine that with our rare bouts of stupidity and/or bad luck, and you have the perfect recipes for the weirdest medical cases reported by doctors all over the world. We found one such interesting list on Livesciencethat we had to share with our readers.

For 10 years a young man in Brazil had been suffering from throbbing headaches and vision problems. On close examination, it turned out there were small stone-like calcium deposits in his brain. This was apparently an extreme complication brought about by Celiac disease, an autoimmune disorder that over time affected the lining of the small reduced the  body’s ability to absorb nutrients.

It is unclear how exactly celiac disease resulted in calcification in the brain, but researchers said it is possible that the patient’s lowered ability to absorb iron may have had a role. 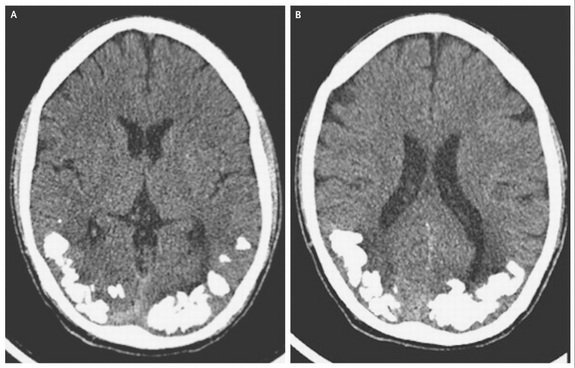 Surfer’s eye is a condition where fibrous tissue grows over the surface of the eye. While usually doctors fix this by cutting off the tissue using scissors, one Brazilian surfer decided to use the force of a wave to fix it. He dunked his head into the wall of the 30-ft wave and astonishingly the blunt force of the wave tore the irritating fibrous tissue. Doctors however said that he was lucky as the force of the water could have seriously injured his eye. You think you have body odor issues? This guy had been suffering from weird body odor for four years. He also said there was a creamy yellow-ish substance on his armpits. Turns out, the odor was caused by the bacteria Corynebacterium tenuis, which affects hair shafts. He had to shave off his armpit hair and treat the area with aluminium chloride. The odor disappeared after several weeks.